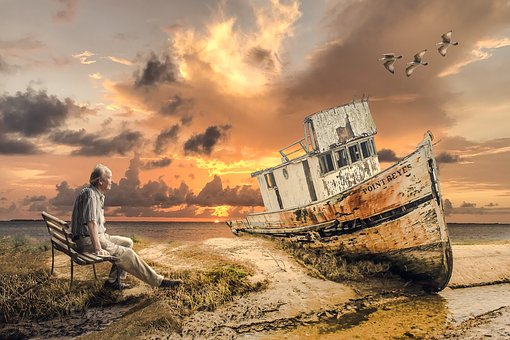 I was found guilty. Fornicating with another man’s wife. Fornicating. Sounds clinical. Clean. Orderly. Our passion was none of that. Messy and frantic. They sentenced me to exile. I had to board my boat and leave. I don’t know what happened to my lover. Nothing good, I suppose. Women who commit adultery are usually branded, driven through the streets, and stoned. I prayed that her husband pleaded for leniency. That he saved her from the mob. He wasn’t a bad man. But his wife found no passion or joy in having sex with him. Her and I. We were like two children who just discovered pleasure.

I bought supplies from the money I made selling my land and belongings. I moved everything to the boat and then, with great formality, the guards of the judges cut the line that tethered my boat to the pier and off I went. Slowly at first. Too slowly. A dismal crowd had gathered. They wanted to see the criminal. They wanted to know how my face would look in the face of exile from the city. The city was everything. The countryside was for farmers and the woods were for witches and other monsters. The city wall kept everyone safe. Life outside the wall was unthinkable.

The wind picked up and I opened my sail. Full bloom. Like a spring rose. I had no maps. I had no idea what lay before me. My compass indicated I was drifting south. By the tenth day, I had already drifted farther than anyone in my city. In the day, the sea dazzled with a pale green sheen. I fished for food. In the dusk, the sea turned silvery and looked luxurious. At night, there was an immense yawning nothingness. The blackness was total. I lost all sense of being or down or left or right. I lay in my cot and thought of her. The desire was mad. Deeper than the sea. I wanted her terribly. Like a brimming glass of water after a day crossing the desert.

In the morning, I gazed at the sea and fished. My days were efficient. I kept busy. Fishing, cleaning, tending to the sails, exercising, reading books, eating meager meals, thinking of her. As the days stretched, I began to suffer from melancholy. I lost meaning. I doubted the existence of the gods. I craved companionship. And then one day I woke and I stared through the porthole and decided I would find meaning. Each day, I would renew meaning. And so it went. Day after day. I sailed my exiled boat to nowhere hoping I would find land. I was alone. Fear rose in the night. Then I slept. And then I committed myself to meaning. I was completely free. I hadn’t realized how difficult and easy it was to be free.

I will tell you this. I survived. I eventually found land. I found fresh water. I survived. And I never forgot her. Desire was my meaning. The memory of pleasure gave me life, breath, and sanity. I forgot the gods. The gods no longer had meaning. Each day I created new meaning from the memory of desire. This is how I lived my days until I died of old age on a deserted beach. I regretted nothing. My crime of fornication had given me strength and edification. Sometimes committing a crime can free you.