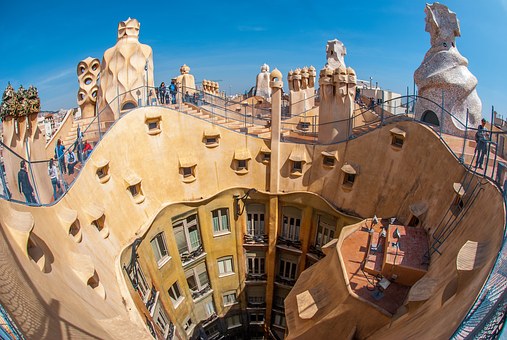 December 30. I had been walking the city for hours and my feet were sore despite wearing my jogging shoes. The air was very cool but there was still a fine sheen of sweat on my brow and upper lip. I had started in the Gothic Quarter and was now near, less than half a mile, to La Sagrada Familia. There weren’t many people out walking. Occasionally I would see a woman pushing a stroller or kids kicking around a football or couples walking hand in hand. I was hungry but it was siesta time so many restaurants were closed until the next hour. The Spaniards take siesta seriously. I had passed parks with people sleeping on benches or on blankets on the grass. I stopped, weary and famished, by a fountain. I think I was in an alley as I saw mostly the backs of buildings. The fountain was simple. A single turret with a requisite gargoyle spitting water. The fountain was in front of an elegant though nondescript building. It was painted in a deep ochre and had massive wooden doors. I trailed my hand in the cool fountain water when the doors opened and ten men dressed in black emerged. They had short hair, no facial hair and were dressed in black turtlenecks and pants. Despite these similarities, each one looked different. Each one looked happy. I thought they might be priests. I scanned the building for a cross. The men stopped and chatted in a circle. They paid me no attention until one of the men, a blonde man, approached and asked me something in Spanish.

The man switched to English and I could detect a German accent. “It’s a lovely day, isn’t it?” he asked.

“Yes. Should I not be sitting on this fountain? It’s just I was tired. I had walked so much.”

“Of course, you can sit here.”

“What is this building?” I really was quite interested.

He laughed. “Not quite. It’s where art is derived. All of us,” he swept his arm to the men in the circle, “are artists seeking inspiration.”

I was intrigued. “I do abstract art,” I said.

“Ah, well you should come in.” He took my hand and led me to the massive doors. He opened them and I stepped in. There was darkness. Before I could say anything, the door closed. The man did not come in.

“Hello…” I yelled out. The building was very dark and I walked forward haltingly. Eventually, I saw a thousand points of light amidst the dark. I felt dizzy and fell to the floor but the floor felt like it was moving. Like I was on a vast ocean in the middle of the night. I grew scared, noxious, and was very near vomiting when I looked up and saw a swirl of colors and it was beautiful. I stayed on the ground and let the colors, the lights, and the darkness embrace me. I don’t know how long I was there. Eventually, the growling of my stomach forced me to seek the door.

When I emerged it was night and all the beauty of Barcelona twinkled. The men were gone. The fountain was still spitting water. I staggered forward. It was as of I had entered another dimension. I walked and found a restaurant. When I was served the food every taste was heightened. How beautiful an egg was. How beautiful ham was. How remarkable was sausage in paella? I felt altered. The world was so special and gorgeous. I took a taxi back to my hotel and slept a sleep so deep and luscious. When I awoke and I drew and painted in my journal. Ideas were bursting inside my head. The next day I sought out the alley. I asked everyone on the street where the Hall of Art was. I inspected maps. I Googled it. No one knew about it. I gave up. But there was in me this deep sense of beauty and interest in the world. How remarkable the world was.

Perhaps we only get to enter the Hall of Art once in our life.

I left Barcelona with a widened soul and a light heart.