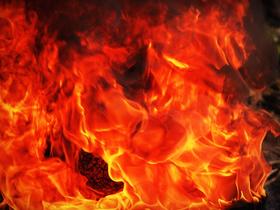 In the evening, a woman came to the door with a shallow cup.

“May I have some sugar?” asked the woman, no older than thirty years and with pleasant eyes.

“Certainly,” I said. I gave her sugar and then closed the door.

In the morning, an old woman came to the door. “I’m so hungry,” said the woman. “Do you have any food you can spare?” My breakfast of bread and bacon sat on the table. I gave the woman my plate and I went hungry until supper time when father came in from the fields and we ate mutton.

The next day a shivering child came to the door. “Do you have a sweater? I am so cold,” he said. Father’s sweater was warming by the fire. I gave the boy the sweater. When father found out he was angry. He would be cold in the fields.

“But people are in need,” I told him.

“People are in need everywhere. People will always be in need. You must care for yourself first,” he said.

I did not listen to father. I breathed and I prayed. Over the next two months, many people came to our door and I gave all that I had. At the end of two months, we had nothing. All our food was gone. The furniture was gone. Only the tattered clothes on our body remained. We still had the roof over our heads but that would not remain. When father was out in the fields, I set fire to the house. It was an offering to my God. I roamed the land and asked for help but no one would help. They shut the door on me. Father found work on another farm and would no longer speak to me. I collapsed under a hazel tree. I breathed and I prayed until I exhaled my last breath.

A priest said I was an example of perfect femininity. A woman who gives everything and gets nothing in return. When the priest married a couple, he called the woman a bride. A bride like Brigid. Now all women who marry are called brides and their husbands expect them to sacrifice everything.

I am a skeleton in consecrated ground. My gravestone reads, “She gave everything. She was kind. A true bride of God.” I did give everything but not out of kindness. I wanted to be dead. I wanted to give away my life because I no longer wanted it. It was painful praying to a sadistic God. I no longer pray because I can no longer breathe. I am content with the shade of the hazel tree casting its shadows over my grave. I gave everything and now  I can rest because there is no longer anything to give.