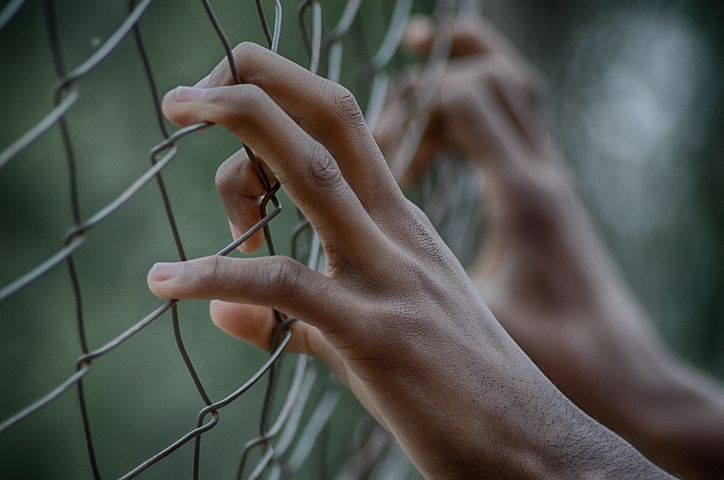 November 20, 2019 Brian Coyle
Is it for fear to wet a widow’s eye
That thou consum’st thyself in single life?
Ah, if thou issueless shalt hap to die,
The world will wail thee like a makeless wife;
The world will be thy widow and still weep,
That thou no form of thee hast left behind,
-Shakespeare, Sonnet 8

Old Dawg could hear the creaking of the gate. It was slow moving and in no hurry to let the inmate out. Dawg was in jeans, a t-shirt, railroad boots, a belt studded with silver, and tats snaking up his arms and covering his chest. He was holding a plastic bag with a few books, pictures, and a stack of pages with all his poetry. He didn’t know too many words when he was thrown in prison, but he spent time in the prison library memorizing words from the dictionary and reading books. He liked that one book – Catch-22 – it was a hoot. Dawg got it into his head to read Shakespeare. Boy, did MacBeth take time. Of course, he had time on his hands. He learned enough that Lady MacBeth was the real culprit. The bitch in the gown. And then she couldn’t take it. The blood on her hands. Dawg had his share of blood. Dad killed his mom in front of him and he saw his drug dealer stab someone. His girlfriend slit her wrists. He spent seven years in prison for drugs and now he was a free man. If only the gate would open.

And then it did and he walked fast. He walked three blocks to a Greyhound Bus Station.

“Where can I go for $50, man?” Dawg was itching to leave Knuckle Junction.

“I can get you to Des Moines.” The teller sounded bored.

“Then get me to Des Moines.”

It was a five hour bus ride with plenty of bumps along the way. He had folk in North Dakota. He thought he had a cousin who worked with tribal police. Nah. Dawg wasn’t going to the Res. They might give him a place to stay, a simple job…but the sting of dad, Running Fox, would zip through all their minds. He would forever be the boy with the murdered  mother. Besides, his mom was white. His connection to the Res was tenuous.

When he had disembarked in Des Moines he had a hundred dollars left so he found a bar and ordered a Bourbon. He pulled out a book the librarian gave him to keep. Shakespeare’s sonnets. Dawg went to Sonnet 9.

But beauty’s waste hath in the world an end,

And kept unused, the user so destroys it.

No love toward others in that bosom sits

That on himself such murd’rous shame commits.

=Dawg looked in the bar mirror. He was chiseled, muscled, and he still had youth. It would be a shame to waste the beauty.

In walked his Lady MacBeth. High riding jean shorts, big breasts covered by a t-shirt stamped with the Budweiser logo. She flicked her black hair.

“You’re going to have my babies,” Dawg said.

She looked at him with sharp eyes.

“Can’t waste our beauty. The world deserves it.”

“What if I told you I killed someone?” she asked in a husky, sex inducing voice.