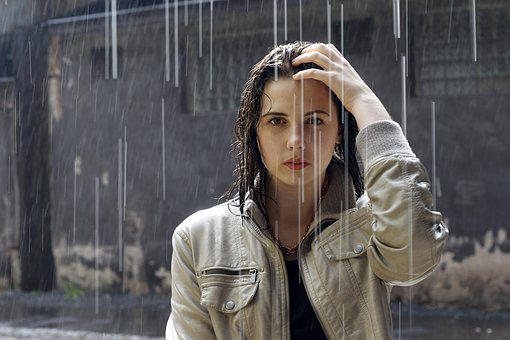 This hard California rain.
The kind that digs in your soul with a spoon.
Not in months and then drains
Like an eroded pipe.
It blasts an inferno.
Mrs. Los Angeles is on fire.
The strippers are huddled in their huts of money.
The hookers are taking shelter by Donut Deli
The police are sitting in Jewy restaurants,
Talking about Palm Springs and a spot in the Valley.
In between bites of Rye and spoons of slaw.
We drove home in a torrent.
Ma watching her show, that show.
You’ll never be as beautiful as the woman in red.
Ma says this, if only she had a pretty girl.
I buried, like an ostrich, my face in her pillow.
Smothered sweat, ammonia from hair dye.
The Queen had her imprint.
That nasty Avon scent.
That concave form in the mattress.
A cast of her embittered limbs.
At least thirty prescription bottles,
On the worn burgundy dresser.
I don’t remember the names.
Minor tranquilizers, major tranquilizers,
Oh, sweet little Valium cradled in my palm.
There’s some book, not the Gulag by S.
It’s on my Dad’s side of the bed.
The Soviets led a man, cigarette in mouth,
And submerged him in an icy waterhole.
“Let me out, let me out”
“This torture, comrade.”
Ma’s room was cold,
Swamp cooler puffing recycled air.
“Why me, why me?”
Pleaded the man near death.
“Why anyone? This dice. Your skin crack.”
Ma burst in…scent of Ben Gay,
And that perfume that soaks the pillow.
Get out, get out.
She grabbed a hangar and beat me.
The body is hard jail.
I retreated to my room.
Wind knocking tree branches on the window.
This hard California rain.