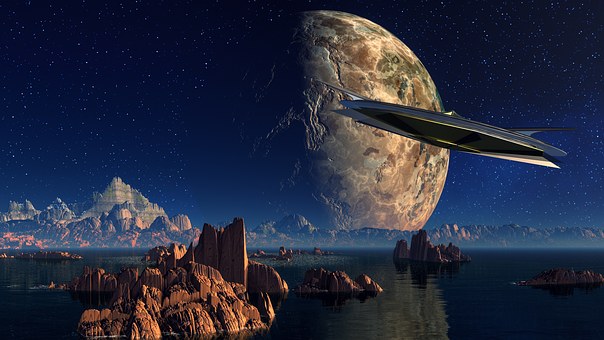 The Beast appeared during the time of the kings. King Monos, the third in a line of mighty warriors, ruled the land with a fist. He had five wives and the last was Helena Arcadia, a daughter of a king in another land he had conquered. He didn’t much care for Helena and the other wives blocked her from having any power in the palace. Helena was very lonely and every day she went on long walks. Sometimes she cried but mostly she roamed the kingdom looking for something, anything that would ameliorate the crushing pain inside her. One day, there was a flash of light and explosion in the sky. She saw something careen into Earth. Helena ran to see what had fallen. There was a hole in the ground, hot and steaming. A beast, reddish, thick skin, hooved feet, and enormous black eyes, stood in the hole. He extended his long arm and long finger that was glowing at the tip. Helena felt her heart flutter. There was crumpled metal all around him. The beast spoke and Helena marveled at the complexity of the language. She was not afraid. There was something in her that felt quite tender to the beast. He was obviously far from home and alone. Helena assumed he was lonely. Helena led the beast to a cave.

“You should hide here,” she said. “I will get you food.” She put her fingers to her mouth. Helena hurried to the palace kitchen and filled a basket with fruits, vegetables, nuts, roasted goat, grilled beef, and a jug of wine. The staff eyed her curiously. Helena rushed to the cave. At first, she didn’t see the beast and thought he might have left. From the depths of the cave, she saw his glowing dark eyes. They were like hot coals. Helena named each food and fed it to the beast. He enjoyed the apples. The goat made him gag. His favorite were the cucumbers. Helena asked him where he was from. He pointed to the darkening sky. She hadn’t considered that there might be other life in the heavens.

Helena visited the beast every day for long hours. One day, she arrived with bruises and marks. The king had gotten drunk and beat her. The beast placed his fingers on her wounds and the wounds were healed. In the distance was a soldier spying on them. He went back to the king and shared news of the beast. The king became angry and sent an army to capture the beast and Helena. Helena screamed. She loved the beast. The king prepared to kill the beast when a giant wheel and stairway appeared in the sky. The beast ascended to the heavens. Helena wept for the only thing she had loved. Poets wrote of the beast and the hole Helena found him in. The beast became a thing named Satan from the underworld. Red skin, black eyes, an offensive language. Helena became a bride of Satan. She spent the rest of her days in mourning.

“One day,” she said. “The people of Earth shall go to the heavens and there they will find many beasts. Teeming life. Earth isn’t so special.” Everyone thought she was mad. Earth and their kingdom was the most special place in the universe.

1 thought on “Helena and the Beast (Story by R.C. Peris)”