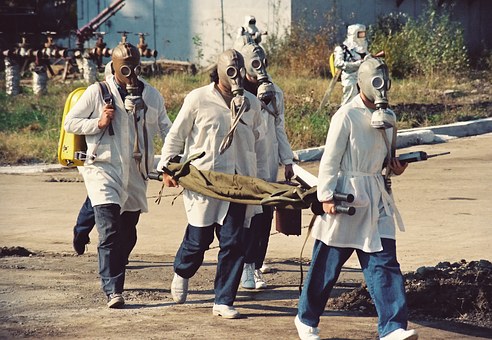 Lucent was a dead town near a now-closed nuclear reactor. Ten years ago, the nuclear reactor had a meltdown and the town was evacuated. There have been so many stories about the MacArthur reactor that it is impossible to know what is true. Were the workers negligent? Was the reactor poorly constructed? Were there not enough safety measures? The government was quiet until they began blaming the workers and tried three men with terrible radiation sickness. They got life in prison, but really they only had a few months more to live.

Someone started tour groups to Lucent. You would circle the perimeter. From the perimeter, you could still see the twin nuclear reactors as still and distant as cold mountains. I came to take photos. As we walked the edge of the town I heard growling. A stray dog emerged and he had red eyes and an unusually elongated body. The dog stared at me, snarled, and then disappeared into a barn. I snapped as many photos as I could. Some of the other tour mates snapped photos of the dog.

“Wild,” said one guy from Wales. He talked non-stop about nuclear reactors on the way here. Apparently, he was pursuing a PhD in physics from Cambridge.

Seeing the dog seeded a growing alarm. The town was dangerous. Perhaps it was never fully evacuated.

The group kept walking. Dusk was not far off. That when we saw it. I heard it before I could see it. It was a child walking on all fours and breathing heavily. She growled at us and disappeared into a pit. By her size, she couldn’t have been more than seven. The reactor disaster happened eight years ago.

“They didn’t clear this town,” I told the guy from Wales. “This town is full of mutants.”

The tour guide was rattled and ceased the tour. “There’s a diner 15 miles from here. You can get your fill of hamburgers and meatloaf.” She rushed us back to the bus.

“What did we just see?” I asked the guide from Wales.

“Deformities from radiation poisoning.” He typed on his phone.

The scientist from Wales. “Probably. You’re not pregnant are you?” He kept typing.

“Perhaps. I’m going to blow this story wide open. I have pictures. I’m on Twitter now.”

We went to our motel rooms and I realized I could sleep easily. The next day I was packed and waiting for the bus when FBI cars piled into the parking lot.

“What’s going on?” I asked the tour guide.

The tour guide shrugged. I knew his camera and photos were now gone. I knew he was killed for those photos. His Tweets deleted. I knew Lucent was not a dead town but a town overrun by mutants. I boarded the bus and didn’t breathe easily until we reached Cleveland. Nuclear reactors may be safer than coal but they were a nightmare in the aftermath of a disaster. Mutants were hard to find and dispose of.