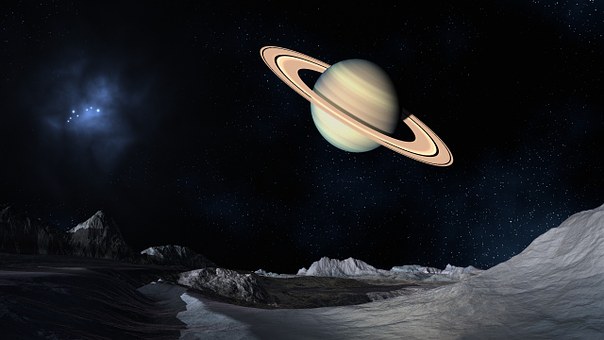 The transmission came in on the Z channel. The Z channel was an old channel the miners used back when Titan, a moon of Saturn, was being excavated for silicates and iron. I was the captain of the Kerrigan, a commercial ship that brought supplies to other planets and their moons where humans toiled, researched, and adapted to life outside of Earth. The transmission came as I was about to slingshot off of Saturn’s gravity.

“Captain, we have a distress signal from Titan.” The co-pilot, with nut brown skin and curly hair that brushed her shoulders, looked momentarily panicked.

“It’s okay, Eosha,” I said. I tugged at my tunic to seem official (only captains wore tunics), but it had the unfortunate effect of accentuating my breasts inherited from a long line of big-bosomed Earth women. “Content?”

All miners on Titan were genetically enhanced to deal with the methane-rich environment of Titan. With depleting oxygen, the miner was likely already dead but I had a legal and moral duty to help any human in distress in the solar system and the universe.

“Navigator set the direction for Titan. Latch onto the signal source.”

The navigator did as told. In two days, we reached Titan. The source was located in a crevasse. I sent a rescue crew out and three hours later they arrived with a man, a miner based on his outfit, who was unconscious. The medical crew went to work and I watched. He was pumped with oxygen and given various injections. He never blossomed to consciousness. Not a consciousness that was demonstrated to me.

“What should we do?” asked Dr. Horoisha.

“Hook him up to the dream machine.”

The medical crew did as told and on a small screen, the man’s thoughts were projected. It was a father and son playing baseball. I wasn’t sure if the man was the father or son.

“What should we do?” Doctor Horoisha was not one to argue.

The medical team unhooked and shut off the power. The man, quite handsome in repose, exhaled his last breath.

I left for my office and stared at my computer screen. Do dreaming of memories make you alive? Or are you merely dead and replaying the expanse of your life as the last energy levels of your brain evaporate into the universe? It is strange. Humans have made so many advancements, but we still know so little of our own brains or the boundary between life and death.