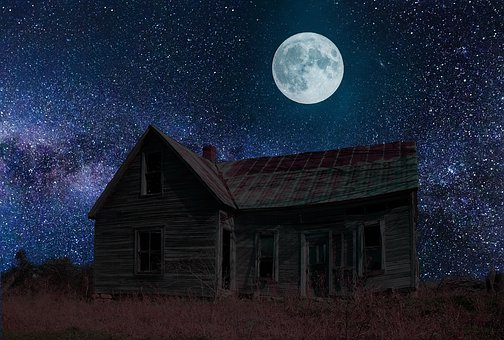 My parents purchased the house at a steep discount. The family that lived there needed to sell fast. The mother and daughter had both committed suicides in the house. There were seven in the family. The family had extended the house by narrowing the garage. The garage was only four feet deep. Behind the wall were two bedrooms connected by a short hallway with a built-in bookcase. Tight blinds covered the windows so that even in daylight the rooms were murky gray. These rooms became my brothers’ rooms. To get to the room you had to go through my sister’s room, which was bare and had only a bed and nightstand with a small black and white TV. My sister kept her room dark. There was the constant glow of the TV. She never turned it off.

As I got older, the darkness was everywhere in the house. It soaked my bedroom. My blinds did not form a perfect seal and moonlight would leak in like a drippy faucet. The moon cast pale light on my my dolls and their eyes blazed. I heard things. All over the house. Voices. Sounds. The house seemed malevolent and I hated it.

One night, as I shivered in the dark, my father had a heart attack and was pronounced dead at the hospital.

I grabbed my mother’s hand. “The dark took him. Something lives in the dark. It snatches life and sanity. I will be afraid for the rest of my life.”