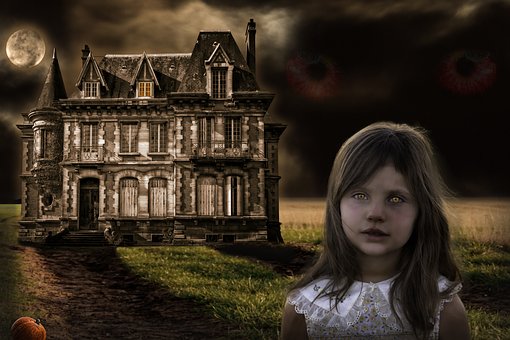 October 31st. Halloween. It was a tradition to go to The Russian Tea Room. Manhattan. We began with Pelmeni Siberian. The dumplings were scrumptious. Then she ordered Boeuf à la Stroganoff. I had the Langoustine.

She pouted. My darling Anastasia was wearing a beautiful white lace dress with a pale grass green sash. I had found the antiquated gown at a thrift store for only forty dollars. When she put it on this evening my breath got caught in my throat. She looked so lovely. I carefully curled her hair. And then, and this is the important thing, we applied fake blood on the left side of her face and gown. We then took putty to make it seem as if she had gaping wounds from bullets. Anastasia insisted.

“I want to look like I was simply destroyed by the Bolsheviks.” Anastasia then combed blood through her hair. Her curls loosened and then hardened.

The night was set. Dinner at The Russian Tea Room and then trick-or-treating in our co-op. And then the classic Poltergeist movie afterward. Halloween was a Wednesday and I gave permission to Anastasia to miss school the next day. Thursday was All Saints Day and we would go to the cemetery in Brooklyn and lay flowers on the graves of her father, Mikhail Orloff, and her grandmother, Alexandra Alexandrovna.

The Russian Tea Room was splendid. There was an ice sculpture of a bear and guests were offered complimentary champagne.

“Anastasia, you may drink the champagne. Why not? A little treat for my sweet.”

The waiter served one glass. “No, I need two,” I said.

The waiter blinked and then shrugged his shoulders. “But of course.” He came back in under two minutes and placed both glasses before me.

“Here you go, Anastasia.” I pushed the glass in front of her.

She sipped. “Oh, mama. This is delightful. It tickles my nose.”

The waiter came back. There was a darkness to his features and his hair was slicked back. His name was Antonio. Obviously, Italian. He probably lived on Staten Island. I ordered our food. His eyebrows raised.

Off he went. The walls above the red leather booths were covered with mirrors. Anastasia made faces. She then made a finger gun and pretended to blow her head off.

“You’re such a clown, Anastasia.” I laughed and drank my champagne. The restaurant was busy. Most people were eating and thick in conversation. No one ogled Anastasia in her costume. No one even commented. Strange.

The food arrived, and the waiter placed all the dishes in front of me. How odd. I pushed Anastasia’s dish toward her. We ate happily and silently. Anastasia had a great love of Stroganoff.

“We already had our appetizer. We decided against borscht. Do you not remember?”

“Hmmm. I’m not sure why I would turn down borscht. It was papa’s favorite.”

Anastasia frowned and then proceeded to finish every morsel on her plate.

“But you will get candy later.”

“Blintzes.” Anastasia was nearly screaming. I looked around, but no one seemed to notice.

The waiter appeared, and I ordered. He removed the dishes. “Was everything good, Madam?”

“Well, then…” He didn’t finish his sentence but walked off with a slight shrug. Again. Strange waiter.

The cherry blintzes with vanilla ice cream arrived and so did the bill. I handed over my credit card. I ate half the dessert and Anastasia finished the other half. She was starting to look tired.

“No, mama. I want to be awake. It’s Halloween. Ghosts and ghouls. Witches zipping about the skyscrapers. This is the best day.”

She wrinkled her nose. “Christmas would be wonderful if you didn’t insist on me learning so many Christmas songs for the violin.”

“You must push yourself, Anastasia. You won’t get into the Julliard with that attitude.”

Anastasia folded her arms. I looked at her closely. She looked very disturbing with the blood and faux flesh wounds. I felt a tightening in my stomach and then a surge of pain in my head. Was I getting a migraine?

“Let’s go,” I said. I was nearly out the door when the waiter rushed forward with my credit card. I signed the receipt and left a fair tip even though he had been acting so strangely during our dinner.

Anastasia and I walked into the street. It was cool. A mellow cold snap. Winter was on its way. Anastasia let go of my hand and twirled on the sidewalk. Her dress flared up slightly. I smiled.

“Katharine!” Someone was yelling. It was Lindzey Smith. She was walking towards me with a smile. She had on a purple and black witches hat. “How are you?”

“Wonderful,” I told her. “Anastasia and I had dinner at The Russian Tea Room. Doesn’t she look positively spooky in her costume?”

Lindzey frowned and looked in the direction of where I was pointing. “Are you okay, Katharine?”

“Just a headache. But look at Anastasia…”

She was gone. My little girl was gone. She had vanished from the sidewalk. “What’s happened? My baby…”

I staggered and then leaned heavily on Lindzey. Now I remembered. Tomorrow, on All Saints Day, I will put flowers on three graves.

“But I saw her Lindzey. We had dinner.”

“You saw a ghost, Katharine.”

Lindzey hailed a taxi. “Let’s get you home.”

“Home? There is no home without my family.” And then I silently cried on Lindzey’s shoulder.

Halloween was a single harrowing day for some people. Halloween happened every day for me. Ghosts. So many ghosts. I saw legions of them walking the sidewalks as the taxi drove down 57th Street.