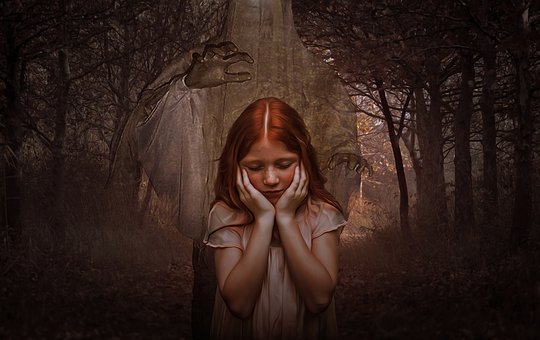 I think he was a ghost. He walked towards. Thump, thump. His male member, that strange thing, swung like a dead fish on a hook and it seemed shriveled and wrinkled like a dried fig. He paid no attention to it. He flaunted his nudity. No trace of modesty or fear of judgment. How do men do that? I laid in bed with the sheet pulled up to my chin.

“That was fun.” He wiped his nose with the back of his hand.

I said nothing. I never wanted to talk to ghosts. Even as a child, I sensed talking to a ghost would be useless. They would give cryptic statements – the moon is full of rice or cheese gives you worms.

Where did I meet this ghost? Oh, yes. I was seeking chow mein in Tribeca at midnight. CHINESE FOR U. That was the place. The ghost ordered shrimp stir fry. He said I was the prettiest girl he had ever seen eating chow mein. The ghost with clothes seemed funny, kind, but a bit, a tad bit, brash. He coaxed me, like a baby through the birth canal, to the light of his apartment. It was, indeed, quite bright, but he went around flicking switches or dimming other things. He led me to the bedroom and that’s where things became chaotic. He pushed me onto the bed. Ripped my skirt. I said, no. No, no, no, no. He said, yes. Yes, yes, yes, yes. All my clothes got flung to the floor and far from the bed. It was over rather quickly and then he left to grab water. That’s what he said. I pulled the sheets around me. I was frozen. A Popsicle in the Arctic. I was stuck to the sheets.

“Up for another round?” He tugged at the sheet.

He was a ghost and this was a nightmare. But since I don’t, as a clear rule, do not talk to ghosts I allowed the pawing to begin again; less brutal this time though no less frightening or intrusive.

I was being raped. By a ghost. I could tell no one. I just wished I knew how to make ghosts disappear. Maybe I should have spoken to ghosts as a child. I might have learned the magic to make them disappear.