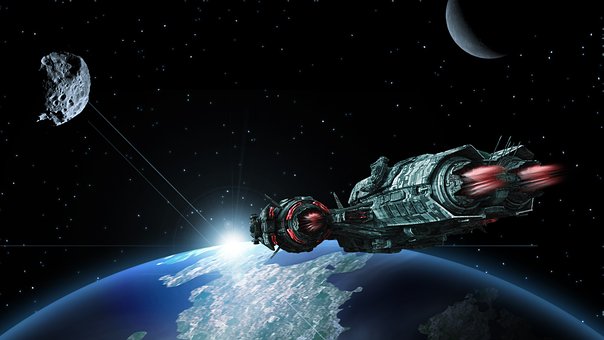 In my mother’s generation, there were human beings called men. Men were also fathers. I would have a father. It’s strange to say it. On this spaceship, there are only women. In the lab, there are dishes of sperm. All the sperm was harvested from men on Earth. There is enough sperm to last for two hundred generations of humans in space. When I say human, I mean women. I have an egg mother but all the adult women on board claim to be my mother. The women are very vocal and are always quick to tell me what I can do or cannot do. I am one of hundred children on board the spaceship. When I say children I mean female children. They are all my sisters. We are not from the same egg but we are taught about sisterhood and how important it is to get along with all your sisters.

I am twelve and sad there are only women in my life. Long ago, Earth scientists decided women are the best astronauts for long-term space travel as we are less combative, use fewer nutrients, and are more likely to support and protect the group. It was also decided that with no men around women would never be jealous or feel threatened. I don’t agree. The women can be nasty to each other. It is never anything direct or in the open. All the anger is secretive. My egg mother put a chemical in another mother’s shampoo and her hair turned gray. The mother was outraged and demanded a confrontation but the women only cooed and feigned sympathy. My egg mother swore me to secrecy.

I looked up my sperm donor. P1239. On Earth, he had been a violinist with a symphony. He had a degree in math. He liked video games. He liked to read mystery novels. My sperm donor owned a house by a lake. Someday he wanted to bring a wife and child there. I printed a photo of the house. I keep it under my pillow. Most nights I cry for P1239. He is my father. I miss my father. I don’t know how this is possible when all I have ever known were mothers. As I write this, I can hear mothers arguing in the hall. If I can ever escape this spaceship of women, I will steal a dish of sperm and breed men. There is something wrong in a life lived with only women.

My fingers have turned purple from the pen. One of my sisters has lashed out at me. Instead of plotting revenge, I am plotting an escape from this hive of women.