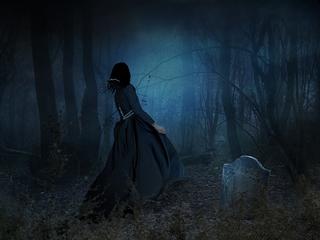 She died quietly. Anna. No rage. One second she was alive and the next second she was dead. My wife had lived longer than was expected. Longer than she should have. Her body was withering but her mind was clinging to the house, our dog, to me. A therapist came in to talk with her. My wife said she missed playing dodgeball in elementary school. It was a random thought. The therapist smiled.

“Imagine a ball coming towards you and you don’t chase after it,” said the therapist. My wife’s eyes glistened. A minute later she died.

Her friend, Clarice, helped me with the funeral. For five months she did my laundry, made my meals, stocked my refrigerator, gave me a shoulder to cry on. In the sixth month, my sex drive came back and I made love to Clarice in a haze of tears and desire.

A year later, Clarice was pregnant and my wife. I had found happiness again. I kissed Clarice, got my lunch sack out of the refrigerator, and locked the front door. Anna was sitting on the porch rocking chair. She was covered in mud. She was dressed in the clothes I buried her in. They were tattered.

“Darling,” she said. Her smile was lovely.

How do you talk to a corpse?

Her brow furrowed. “This is my home.”

“Not anymore,” I explained about Clarice.

“You said we were soulmates. Remember?”

Anna looked devastated. She wandered past me without touching me. In the yard, she kicked a rock with her barefoot.

“You don’t want me?” she didn’t wait for an answer. She wandered down the street. Muddy footprints. A kid kicked a soccer ball but she didn’t chase after it. I hoped Anna found love roaming, muddied, our city. In the red dress, I buried her in.