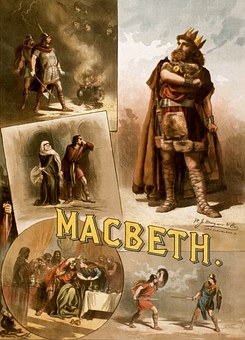 He strode into the group with a swagger, flair, and a face cracked with wrinkles. He smiled. It was not clear he had teeth. His cheeks seemed a bit sunken. He did smile easily. There were some teeth on the bottom of his mandibles. Of course, they looked like baby teeth. He had a turquoise scarf tied around his neck, a paisley shirt straining against his paunch, and jeans that looked ironed. I couldn’t see his feet. I imagined loafers of some sort.

“I’ve been looking for this my whole life,” he said.

“Indeed. So what project shall we work on?”

“Well, the group decided on a production of Macbeth. We’re updating it though. You know…witches not so witchy.”

“Darling, a witch must be witchy.”

I said nothing more and the group continued to chat about roles. Then the man, Edgar, proclaimed that he wanted to play Macbeth – the title role.

“I have a solid background for this role.”

Edgar laughed with a hard edge. “My wife killed somebody and tried to say I influenced her. That I made her.” He placed his hands down flat on the table. “They charged me with conspiracy. I fought and fought the charge. I was released from prison four years later. My no ex-wife is still doing time in federal prison.”

I wasn’t sure what to say. Edgar was still leaning forward with his hands on the table and blazing hot eyes.

“You…you…can be Macbeth.” It was Carol and she seemed spooked.

I didn’t want to risk a more inflamed situation so I granted him the role.

During rehearsals over the next few months, Edgar did well except he was far too flamboyant. He couldn’t say a sentence without affectation.
At the premiere, I stood in the wings (I was the director) and asked Edgar if he was ready.

“Never more ready in my life.”

I looked at his costume and noticed a knife holstered to his belt.

“That’s a very real looking fake knife. What happened to the other knife I gave you?”

“This isn’t a fake knife. I left your knife in the dressing room. Wish me luck.”

And out went Edgar onto the stage with a real knife poised to attack the King of Scotland. I screamed for Nathan but applause drowned the warning.