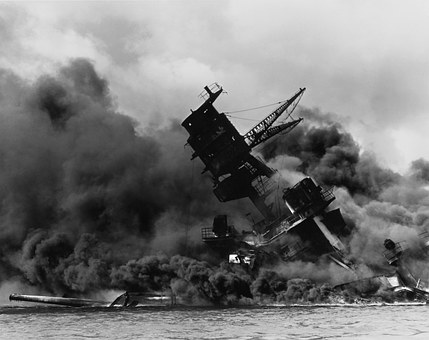 In 1939 Betty Boop was still the rage and Molly Sloan was a devoted fan. Molly looked very much like the iconic Flapper and even her hair was cropped and wispy. She lined her eyes to make them seem larger. Molly was raised in Oregon but moved to San Francisco when she was 19. In two years she had had eight jobs. One warm summer day Molly quit her telephone operator job. She was tired of listening to distant, crackling voices and the odd banging sounds from a bad connection. She left without notice and sat in the park below the Golden Gate Bridge while she smoked. A Navy sailor approached. He asked for a cigarette. Molly handed him her case. He had a lighter in his pocket.

“Sure is,” said Molly. “There are many lovely days in California. Where are you from?”

He laughed. “Nope. Of course, it didn’t stop me from developing a passion for boats. Hey, you want to get some lunch?”

Molly nodded. She had nowhere else to be. They ate chowder on the pier. Molly spent the next two days taking him around the town. Before his ship left port he asked if they could exchange letters. Molly agreed. Over the next year, she received postcards from every port and several long letters. The first postcard was from Panama and the last was from Japan.

One rainy autumn day Jon knocked on her door. They hugged. Molly was shocked to see him. She had just quit another job. He handed her a small box. Inside was a gold ring with a small stone and exotic detail work.

Molly had nothing else to do. Her prospects seemed bleak. She had dated several men over the year Jon was gone but nothing went anywhere. They married two days later in City Hall. Afterward, Jon announced he was being transferred to Naval intelligence in Pearl Harbor, Hawaii.

“You’re coming with me,” he said. Molly was happy about moving to Hawaii. She packed two suitcases and left with high hopes. In Hawaii, she busied herself making their base housing seem homey and laying on the beach. She took the radio with her on her beach excursions and she listened about the war in Europe. Two months later she was pregnant and Jon was thrilled. Molly wasn’t that happy about it. She gave birth easily the next year to a girl they named Betty. A few months later on a December morning in 1941, Jon left at six to do work on a ship in the harbor and Molly left for the commissary to buy milk, bread, and beef for dinner. When she was in the commissary she heard and felt explosions. She ran outside with Betty in her arms. The sky was filled with planes dropping bombs. Molly ran as far as she could and hid in a beach cove. Later that day she returned to her home. It was exactly as she left it. Jon was not there. The next day an officer came to her door. He said Jon had been on a ship that was bombed and he was presumed dead.

“What do you mean presumed?” she asked.

“We haven’t found his body.”

Later in the evening, Molly went to the bombed harbor. She looked at the dark water below. She heard banging and, possibly, voices from the deep. It reminded her of when she was a telephone operator.

“What’s that noise?” she asked an MP.

“Sailors. Alive sailors. We can’t rescue them. We have no way to rescue them. We’ll likely hear banging for the next week or so. Until they eventually…die.” He walked away.

“That’s horrible,” she screamed. She wondered if Jon was banging and calling out for her. Molly realized two things. She hated being a telephone operator because it made her sad to hear distant voices trying to communicate over miles and miles. Lonely, scared people reaching out over the expanse of space. The other thing she realized was that she loved Jon. Maybe she loved him from the first moment under the Golden Gate Bridge or maybe it was when Betty was born. She wasn’t sure when she fell in love except she loved him deeply now.

2 thoughts on “Voices From the Deep (Story by R.C. Peris)”