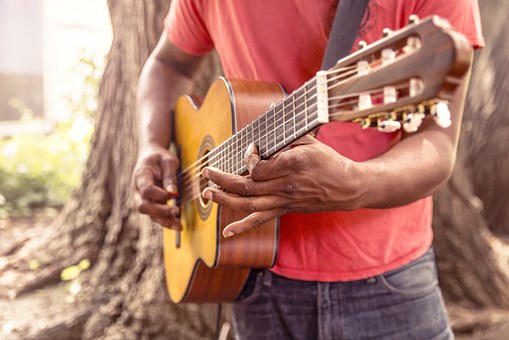 I met him on Grafton Street in Dublin. He was playing the guitar and singing Sunday Bloody Sunday. Or rather trying. Most people ignored him but I liked his red hair and his husky voice. I dropped a five euro note into his guitar case. There was nothing but coins in it. I was the only one who gave a Euro.

He had ended his song and looked at me frankly. Maybe I wasn’t attractive enough. I was about to leave and he spoke.

“A pint would be good.” He poured the money in the guitar case into his pockets, secured his guitar and slung it on his shoulder. “You’re not Irish,” he said.

“Yank then,” he said. I followed him into a bar at the end of the street. He ordered Guinness and I ordered Harp.

“Why did you stop and listen to me?” he asked.

I hesitated. “I went to a party in LA and there was this psychic who said I would meet the love of my life in Ireland and he would be singing a U2 song. Silly, I know. But that’s why I stopped. To be honest I don’t even like U2.”

He laughed. “Nor do I. Popular with the tourists though and we are on Grafton Street.”
We clinked glasses and chatted and then parted ways. He wrote his email address on a napkin. I accidentally trashed it the next day. The day I was supposed to leave for New York. I boarded the plane and landed. The whole trip I thought about Sean. That was his name. I cried when I realized I had no way of contacting him. The love of my life was gone. Such is life. You get a little and then lose a lot.

I eventually married a lawyer from New Jersey but I never forgot Sean. I imagined the babies we would have had. The tiny Dublin flat. The singing. I imagined love lost though I had love.