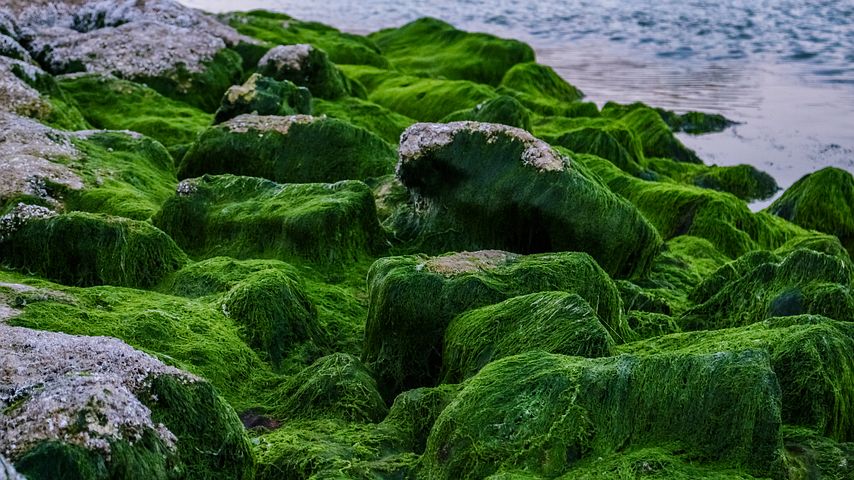 It was deemed the “The Answer”. Algae. It has been present on Earth for about a billion years. It was primordial life. The general population of Homo Sapiens ignored it or poured bleach on it and scoured it away. But a farmer in Sonoma County, snug in one of the valleys of California, built tubs, fifty of them, filled with water and let genetically modified algae grow. What he modified in the DNA of the algae was a company secret in the way the algorithm of Google was a company secret. The farmer’s patent was pending. The algae tubs were next to a winery. The owner was aghast. She banged on the farmers door.

“Whatever science experiment you have going on could ruin my crop.”

The farmer laughed. “It’s only algae.”

The winery owner, a woman in her fifties, didn’t budge. She had her arms crossed tightly around her chest.

“Boo!” The farmer laughed. “When has algae hurt anything?”

The first batch of algae was shipped to a dairy farm to feed the cows. It was so much cheaper than the usual food and it changed the quality of the milk. It was tastier than normal and more nutritious. This gave the farmer an idea. The next batch was crisped in giant ovens the farmer invested in and then the algae chips were dusted with various seasonings. The farmer had manipulated the DNA again to make the algae nutritious to humans. He hired a marketing firm and soon Whole Foods, Trader Joe’s, and other kinds of grocers began selling them. They sold out in record time.

The farmer went on TV and said “algae is perfect…it’s net-neutral. It adds no carbon to the environment. It’s nutritious. Next, I intend to expand the amount of my tubs and create biofuel…algae is easy to grow…even in non-potable water.”

And so the farmer became a “Algae Tycoon”. Algae was the answer to so many environmental problems and feeding the world’s population. The farmer acquired an actual lab, hired biologists, and continued gene modification. He built a mansion in the hills that looked over thousands of tubs growing algae. He was satisfied.

He had a formal party. Limousines, tuxedos, glamorous dresses, and fancy food that contained algae. The farmer (if you could call him that now) wandered onto the balcony. He was self-satisfied. Happy. He was about to rejoin the party when he felt something slimy on his hand. It was pulling on him. Then it exposed itself in the light. It was a giant bright orange algae that consumed him and grew bigger. It moved, along with other monster algae, into the party and consumed any human that they could get. The whole valley was alive with monster algae.

Algae was the Answer. To human overpopulation. The farmer tinkered with a life form a billion years old and managed to create a terror in less than five years. Humans were oddly self-destructive.